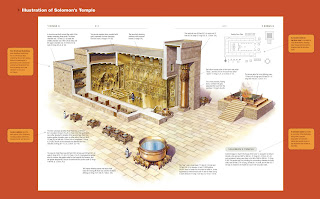 As I’ve preached through the early chapters of 1 Kings, I’ve been reflecting on the temple.

In the book of Exodus (chapter 26 to be exact), God gives very specific instructions about constructing the tabernacle. It functioned as the portable tent where the ark of the covenant–the place where God was present in a particular way–was placed.
Fast forward to the temple construction. There are no specific instructions given by God.
Why not?
Was Solomon’s temple really what God had in mind?
Did God want to dwell in a building build with cedar and limestone?
What if David and Solomon missed the point and God graciously inhabited the fixed building anyway?
What do you think?
Here are a handful of scriptures to consider:
2 Sam. 7
1 Kings 6:12-13
Eph. 2:19-21
1 Cor. 3:16-17
Jn. 2:19-21

3 thoughts on “Was Solomon’s temple really what God had in mind?”