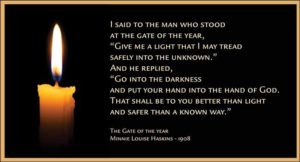 The dark days of World War II had engulfed Europe. It was early days, but Hitler’s war machine was bullying and hammering its neighbours in pursuit of a Thousand Year Reign. It was total war. It would prove to be the bloodiest war in history with perhaps 85 million dead, 100 million people directly involved from more than 30 countries.

September 1st, Hitler had invaded Poland. September 3rd, France and Britain, honouring their alliance with Poland, declared war on Germany. The die was cast and there was no other way to deal with the military monster birthed by the Nazi ideology of world domination except to stand and fight. It fell ‘the man not born to be king’ to address the nation and the world Edward had abdicated the throne and so it fell to his younger brother, George, the man who stuttered, the man who was not to be king. What to say to his people, a nation now at war? December 25, 1939, King George delivered his Christmas Day radio broadcast. And he found the right words, words that have been oft repeated, words now famous and penned in a 1906 poem by Minnie Louise Haskins in 1906. These words proved to be an inspiration to light the way as Britain and the world were plunged into the darkest of times. Profound her insight, that it is not a light to guide us that we need so much as we a Guide. She wrote:

Go out into the darkness and put your hand into the Hand of God.
That shall be to you better than light and safer than a known way.

It was Jesus who reminded us that there would be wars and rumours of wars until the end of the age. When the Great War ended on November 11, 1018 it was said that it was the ‘war to end all wars.’ Many vowed, ‘Never again.’ A scant 21 years later another war a greater war, the bloodiest of all wars. And since the second World War there are more wars. The Great War had shattered the hope that somehow mankind had evolved socially beyond the need for war. It broke the back of the shallow unrealistic optimism of liberal theology, ‘God is in his heaven and all is right with the world.’ There is a dark side to human nature and there is real evil. If there is hope, it is in the God, Who has dealt with sin, and Who has purchased forgiveness – the God Who is there!

May the poetic words that King George VI recited 77 years ago bring you hope and encouragement in a world that is as volatile and uncertain now as it was then.

Uncertainties happen on a global scale and they come to us on a personal scale and everything in between. Many are feeling shaken by the changes in the social fabric of our nation. Remember the words of our Master, the Lord Jesus, Who has told His disciples, “I have told you these things, so that in me you may have peace. In this world you will have trouble. But take heart! I have overcome the world.” (John 16:33) Because we know Him, these are not empty words; they anchor our hearts and shape our emotional responses to the unknowns of our lives, as we face sickness and disappointment, setbacks and obstacles. So be encouraged and look up! We are at the Gate of the Year and He takes us by the hand to lead us through with grace. God bless you as we travel together.

THE GATE OF THE YEAR

God Knows
And I said to the man who stood at the gate of the year:
“Give me a light that I may tread safely into the unknown.”
And he replied:
“Go out into the darkness and put your hand into the Hand of God.
That shall be to you better than light and safer than a known way.”
So I went forth, and finding the Hand of God, trod gladly into the night.
And He led me towards the hills and the breaking of day in the lone East.
So heart be still:
What need our little life
Our human life to know,
If God hath comprehension?
In all the dizzy strife
Of things both high and low,
God hideth His intention.
God knows. His will
Is best. The stretch of years
Which wind ahead, so dim
To our imperfect vision,
Are clear to God. Our fears
Are premature; In Him,
All time hath full provision.
Then rest: until
God moves to lift the veil
From our impatient eyes,
When, as the sweeter features
Of Life’s stern face we hail,
Fair beyond all surmise
God’s thought around His creatures
Our mind shall fill.
— Minnie Louise Haskins in 1906

May you go out into the New Year secure in the grip of the Unchanging Lord of Time and Eternity.

One thought on “A Message for a New Year”