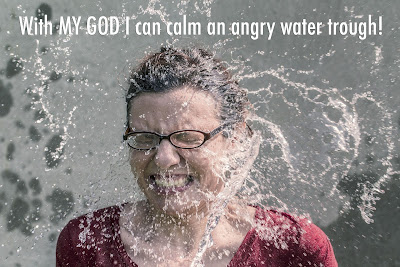 Last Sunday we had a bit of an incident before church. In the past something of this magnitude would have ruined my whole day. So what was different about this time? I handled it God’s way and that changed everything!

Some feel that the Bible is an old irrelevant book that has no real bearing on today.  But this “old” book is where I learned the revolutionary new way to respond to unexpected difficulties.

It says in Philippians 4:6-7
“Do not be anxious about anything, but in every situation, by prayer and petition, with thanksgiving, present your requests to God. 7 And the peace of God, which transcends all understanding, will guard your hearts and your minds in Christ Jesus.”

In the past I struggled with anxiety on a good day so if anything went amiss my anxiety would go into hyper-drive.  This just seemed to make the situation I was struggling with worse. I would get stuck in this negative funk that coloured the situation and made me feel hopeless. I played out the worst-case scenario in my mind. Then the complaining and questioning God would begin. Since I was expecting the situation to go badly it did. When you approach challenges with this mindset it causes emotional torture but I think it also affects the outcome of the issue in a very negative way.  My experiences in the past have proven this true.

On Sunday I approached my issue with a different attitude; the one God asks us to have in Philippians 4:6&7. Sunday morning I got dressed in my church clothes and was just sitting down to relax for a bit when there was a knock on our door. Ashley, who boards horses with us and does the chores on Sunday morning, apologetically informed me that the horse’s water bowl was angry and violently overflowing. Her horse, Pal, thought we had done it on purpose and was happily drinking from his personal horse-size water fountain. Regardless of Pal making the best of the situation, this was a bad situation that needed immediate fixing. This is not the first time this automatic heated water trough has malfunctioned. It has won many a battle in the past and even the times I have conquered it I have taken 4 plus hours to wrangle it back into control. Usually I give up and have to call in the big guns: my husband or father. Just the mention of water trough issues is enough to send me into a spiral of anxiety that ends in panic, complaining, and failure.

But this time God gave me the strength to not go there, and deal with it His way instead. I began with prayer instead of beginning with complaining and frustration.

In the past I thought I was praying but saying “God please help! I seriously can’t believe this happened to me!” and then slipping into self pity and doubting that God would do anything is not really prayer – at least it is not very effective or pleasing to God. But this time I was not praying with a negative attitude. I was able to give control of the situation to God and trust Him to fix it. Trust is so much more fun than anxiety.  Instead of being mad that my water bowl was acting up I thanked God out loud that I was blessed enough to have a heated water bowl for my horses. I think in the past when I was complaining I was giving the devil permission to wreck havoc in my life. By complaining and thinking the worst I was agreeing with Satan instead of agreeing with God. So this time when I agreed with God the “peace that transcends all understanding” that is talked about in Philippians materialized in my heart right there in the middle of my problem. I did not panic this time, I calmly but quickly proceeded to fix the water bowl.

I knew the first thing I had to do was get the water turned off to the bowl but that was not as easy as it first appeared. I rushed to the basement where the shutoff valve is only to remember that wood was blocking it. This meant I would have to go around the wood furnace and the water heater to the dark spidery area behind to get to the valve. So I rushed up stairs where I searched 3 places before finding the flashlight I needed to crawl behind everything. Then when I was crouching past the water heater I flipped some switch and hot water poured all over me. Each of these complications in the past would have plunged me further into anxiety and panic. But this time I was depending on God not on me and He came through.  The peace that was guarding my heart continued to pour into my spirit and so I just screamed and closed the switch and continued on to the water shut off. I could not remember which way to turn the tap but remembered ‘righty tighty, lefty loosey‘ and got it done. I carefully returned passed the furnace and water heater and ran upstairs. I threw a coat over my wet church clothes and went outside passed the barn to the waiting water trough.

A couple days before I had been transferring all my notes from last years day-timer to my new one.  One of the notes was from the last time I had to fix the water trough and it highlighted the mistakes I wanted to not make again! With these fresh in my mind I was able to avoid the pitfalls that had resulted in hours of extra work. In the past I would have got bogged down second-guessing myself and wasted a lot of time deliberating about what to try first. But I thanked God for planting the needed wisdom freshly in my mind.

When I got to the bowl and saw that the float was no longer attached, I did not get stuck, I just confidently reattached the float. I also asked Ashley to help which made it so much easier.  In the past I would have wanted to try to do it myself and that never ended well.  I was not totally sure that I had the float on right but instead of freaking out about it I just left everything else off and first ran down and turned the water back on.

When I returned to the trough and could see that it was all operating well we put the cover back on.

The last time I tried to fix the trough it had taken me about 4 hours but this time through trusting God instead of being anxious it took 15 minutes. Not only did it get fixed but while fixing it I did not lose my peace. I could victoriously go back inside and change into some dry clothes and be on time for and enjoy church.