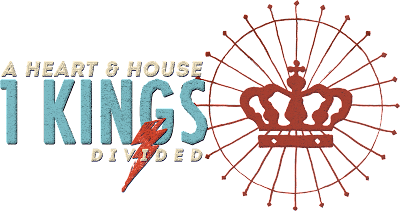 (Our G2G Curriculum was crafted in-house is designed to follow our Fall Sermon Series: 1 Kings ~ A Heart & House Divided. Want to get connected to a G2G group? Contact us and we’ll find a spot for you!)

You may want to begin by watching the sermon that goes with this passage.

SUMMARY: King David is very old.  His spoiled son, Adonijah, senses the time for his kingship is near and he celebrates.  The sneaky son invites his brothers and some tribal officials to join him for a party fit for a king, but he leaves a few important people off the guest list.  Some of the uninvited, Nathan the prophet and Bathsheba, convince the ailing King David to step in and appoint another son, Solomon, to the throne.  David agrees.  He acts quickly: he calls royal officials together and has them anoint Solomon as king.  Another great party—rivaling Adonijah’s—ensues.  Soon Adonijah and his guests discover that their plan has been thwarted.  Solomon, not Adonijah, has been anointed king!  Fearing for their lives, Adonijah’s guests scatter.  Adonijah, himself at risk of death, runs to safety and pleads with King Solomon to spare his life.  Solomon honours his request, for now.

2.    Why did Nathan go to Bathsheba and not directly to the king to make a case for Solomon to be king?  What might have been motivating him?  What motivates you when you avoid confronting someone directly?

3.    David’s parting words to Solomon seem somewhat vengeful (1 Kings 2:2-9).  Was that appropriate?  What if Jesus took David’s place?  What might he instruct Solomon to do?

4.    What other questions come to mind as you wrestle with this text?